Building on Calgary’s Resilience: Construction Now Underway on The Dorian 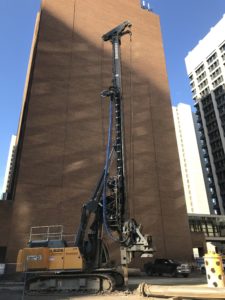 We are happy to announce that construction is officially underway on the latest addition to Calgary’s skyline and the first major downtown office core project since Telus Sky. The 27-storey luxury hotel, The Dorian, is being developed by our team, and constructed by EllisDon. The project means an injection of $110 million into the local economy, hundreds of jobs created during the two-year construction process and over 150 jobs when the hotel is expected to open in spring 2022.

“Building a new hotel at a time when many are screaming bust might not seem apropos, but we’re looking to the future because we see real opportunity in tourism that will translate into billions of dollars in economic activity for this city,” says Andrew Boblin, our Senior Vice President at PBA Land & Development.

The Dorian is an important project for Calgary because it means a significant economic boost for downtown and for tourism; a key economic driver and diversifier. Visitor spending in Calgary is expected to grow to $2.1 billion in 2019. By the end of this year, the number of visitors to Calgary is expected to surpass 7.9 million with continued growth forecasted for 2020.[i]

Overseas travel to Calgary is projected to increase (+4.5%) along with travel from the US (+3.2%) and local leisure travel (+1.7%). Despite lingering challenges in the energy sector, domestic business travel is expected to increase slightly as well (+2.2%).[ii]

“The visitor economy in Calgary can continue to grow and thrive and we’re building one more reason for people to come. The Dorian will help deliver the very best that Calgary has to offer to international visitors, business travellers and locals alike,” says Boblin.

The first stage of construction at 525 5th Avenue SW, which has been operated as a surface parking lot for close to forty years, will involve shoring the perimeter of the site and excavation for a four-level parkade and foundation. The hotel is expected to take just over two years to complete.

With a total of 307 guestrooms – including 133 luxury Marriott Autograph rooms plus 174 Marriott Courtyard rooms –The Dorian helps satisfy the need for higher-end hotel inventory in the downtown core.  It will also be a destination for locals with plans for a 27th-floor lounge and expansive south-facing outdoor patio as well as a main floor day bar and second level bistro with ease of access through Calgary’s +15 infrastructure off 5th Avenue SW.

“This hotel will raise the architectural caliber of Calgary’s skyline but it will also be a symbol of optimism; projects and deals and business is still getting done in Calgary. This city has a long history of resilience. And we’re building on that,” says Boblin.

Here are some of the project highlights:

“As champion of Calgary’s tourism industry, Tourism Calgary works with its partners to develop tourism experiences that attract visitors and support the local economy,” says Cindy Ady, CEO of Tourism Calgary. “We know The Dorian will add to the diverse range of shareable, memorable experiences available to visitors and Calgarians, and we look forward to watching this luxury hotel become part of our city’s skyline.”

[i] Conference Board of Canada’s Travel Markets Outlook